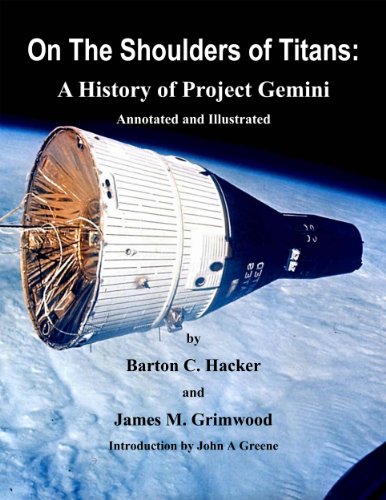 GEMINI was the intermediate manned space flight program between America's first steps into space with Mercury and the amazing and unprecedented accomplishments achieved during the manned lunar expeditions of Apollo. Because of its position between these two other efforts, Gemini is probably less remembered. Still, it more than had its place in man's progress into this new frontier.
Gemini accomplishments were manyfold. They included many firsts: first astronaut-controlled maneuvering in space; first rendezvous in space of one spacecraft with another; first docking of one spacecraft with a propulsive stage and use of that stage to transfer man to high altitude; first traverse of man into the Earth's radiation belts; first extended manned flights of a week or more in duration; first extended stays of man outside his spacecraft; first controlled reentry and precision landing; and many more.
These achievements were significant in ways one cannot truly evaluate even today, but two things stand out: (1) it was the time when America caught up and surpassed the Soviet Union in manned space flight, and (2) these demonstrations of capability were an absolute prerequisite to the phenomenal Apollo accomplishments then yet to come.
PROJECT Gemini is now little remembered, having vanished into that special limbo reserved for the successful intermediate steps in a fast-moving technological advance. Conceived and approved in 1961, the second major project in the American manned space flight program carried men into orbit in 1965 and 1966. Gemini thus kept Americans in space between the path-breaking but limited Earth-orbital missions of Project Mercury and the far more ambitious Project Apollo, which climaxed in 1969 when two men first set foot on the Moon. This book is a detailed history of the failures and victories of the Gemini program. This version of the book includes an overview of Project Gemini and a number of photos from NASA’s project files. 596 pages, color illustrations and photos.