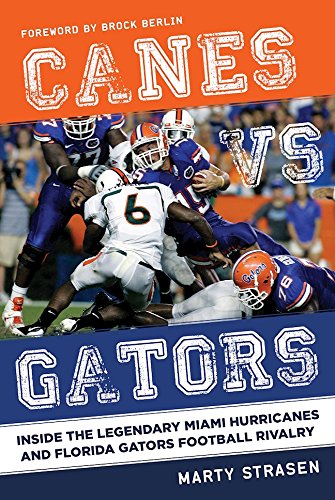 All parties seem to be in agreement that the rivalry between the University of Miami and the University of Florida is as nasty and historical as they come; going back to the thirties, it’s the state of Florida’s oldest major rivalry. Gators beat writer Pat Dooley described the vitriolic rivalry to the author simply as vile.”

History would prove that to be true. In Canes vs. Gators, coaches Urban Meyer, Howard Schnellenberger, Steve Spurrier, Larry Coker, and Ron Zook and several former notable players on both sides of the rivalry, along with key media members for both schools, offer their unique commentary on the intensity of the rivalry. For example, Schnellenberger recalled with anger that after his staff and team were pelted with frozen oranges in 1980, he kicked an extra meaningless field goal in a blowout victory . . . and he wished he’d called on his punter to take the ball and launch it into the Florida student section!

Author Marty Strasen, who covered both schools for over a decade, brings to life the greatest moments of this historic rivalry. This book is the perfect gift for Florida college football fans!


Skyhorse Publishing, as well as our Sports Publishing imprint, are proud to publish a broad range of books for readers interested in sportsbooks about baseball, pro football, college football, pro and college basketball, hockey, or soccer, we have a book about your sport or your team.

Whether you are a New York Yankees fan or hail from Red Sox nation; whether you are a die-hard Green Bay Packers or Dallas Cowboys fan; whether you root for the Kentucky Wildcats, Louisville Cardinals, UCLA Bruins, or Kansas Jayhawks; whether you route for the Boston Bruins, Toronto Maple Leafs, Montreal Canadiens, or Los Angeles Kings; we have a book for you. While not every title we publish becomes a New York Times bestseller or a national bestseller, we are committed to publishing books on subjects that are sometimes overlooked by other publishers and to authors whose work might not otherwise find a home.